The farming operations at Overbury Enterprises near Tewkesbury extend to 1,600 hectares across land ranging from Cotswold Brash at 1000ft to sand over gravel and heavy Lias clays at 100ft.  In addition to 950ha of combinable crops, the LEAF demonstration farm includes 100ha of vegetables and 60ha of hand-picked peas, the farm also hosts a flock of 1,100 ewes on 300ha of permanent pasture.

A recent change to a no-till cropping system has enabled farm manager, Jake Freestone, to implement a conservation agriculture policy across the farm’s arable land.

“We’re practising conservation agriculture in an effort to ensure the farm’s biggest asset, its soils, remain healthy and viable for this and future farming generations,” Jake proclaims.  “What we’re doing is based on three key principles of maintaining and promoting soil health and structure: moving soil as little as possible, preventing soil erosion through cover cropping, and using six-year rotations to control pests and disease.”

“Any soil that is likely to remain bare for more than five weeks will be sown with a cover crop,” Jake explains.  “We also use vetch, crimson clover and buckwheat as companion crops to oilseed rape.  They improve soil structure, provide additional ground cover and reduce the need for autumn insecticides by ‘camouflaging’ the rape from insects. They also produce a thicker canopy which limits pigeon ingress and out-competes weeds, and, in the case of the crimson clover, increase the amount of available nitrogen.”

Direct drilling with the Cross Slot also reduces the amount of capital tied up in machinery and, being a one-pass system, reduces fuel usage. “By having fewer implements and fewer tractors in operation, and by making fewer passes, we’ll save £280,000 over 10 years,” Jake states.

The estate’s sheep enterprise also complements the no-till policy as Jake explains: “Whenever feasible, we’ll use the sheep to graze off the cover crops.  This puts manure back into the system and improves the biology of soils which would otherwise be adversely sterile.  The sheep also help to improve soil structure by trampling-in cover crop residue where it can break down more rapidly.”

The cover cropping strategy relies on the ability to drill crops as quickly and efficiently as possible – preferably within 24 hours of the preceding crop being combined.  “Using the Cross Slot drill enables us to place seed, base fertiliser and slug pellets in one pass.  We can establish winter wheat on lighter land for just £45 per hectare, and at a rate of 6 ha/hour or 10 minutes per hectare.”

With the farm’s heavier land taken into account that figure rises to 18 minutes per hectare.  “In comparison to our old four-pass tillage system, which took almost an hour per hectare, we’re better equipped to drill crops quickly during favourable weather windows.  It also enables us to earn an additional income by contracting for neighbouring farmers and gives our staff a better work-life balance.

“But we wouldn’t be able to achieve these advantages if we didn’t have the right control tools in place to enable us to use the kit accurately. We’re using RTK-enabled autosteer on the sprayer and drill tractor, and have also equipped our current sprayer with individual nozzle control.”

The estate’s first steps into precision farming were taken in 2006 when two tractors were retrofitted with automatic steering.  “From there we progressed to a 36m Bateman sprayer with 10-sections controlled through a Topcon X20 console.  We’ve subsequently upgraded to a similar machine equipped with auto-steer and individual section control which run through a Topcon X30 console supplied and fitted by LH Agro.”

Individual nozzle control is provided via a CAN-based system utilising Pentair’s Hypro® ProStop-E™ nozzle bodies, which provide instantaneous on/off control with 12 volt actuation to eliminate misapplications and waste. They are driven by a Topcon Apollo spray ECU, connected by a single cable containing only four wires, power and CAN, which makes for a very quick, tidy installation: individual bodies can easily be swapped with no re-programming required.

“We can now control all 72 nozzles independently which means there’s less over-lapping and our variable spraying costs have come down,” Jake continues.  On one, square-shaped, field which previously registered as 29 hectares in terms of area sprayed, the introduction of individual nozzle control has resulted in a 2% reduction in sprayed area, with the narrower over-lap margins meaning the field now measures just 28.5 hectares.  “For wheat, which costs £600/ha in crop protection chemicals and liquid fertiliser, we’re saving £300 on that field alone.  For more awkwardly shaped fields with mature trees or ponds to negotiate, the savings are even bigger.”

The Cross Slot drill is also controlled via a Topcon X30 console and RTK-enabled auto-steer system which; “enables us to work faster and more accurately and to take advantage of favourable weather windows,” Jake continues. “The Topcon kit is easy to operate, even for staff with little or no prior experience of computer-controlled equipment, and enables them to get more work achieved in a shorter time. The auto-steer kit also enables us to maintain drilling accuracy, even when working in thick cover crops where markers can’t be used.

“Despite using fewer inputs, our wheat yields are on a par with where they were when we were using a traditional tillage system,” Jake explains. “And our 5-year rolling yield average for oilseed rape has improved by 0.78t/ha.  That’s partly due to the companion crops reducing weed competition, but also because we’re able to place every drop of liquid fertiliser and chemical with greater precision.” 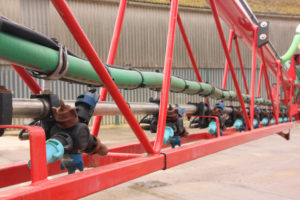 The Topcon equipped sprayer enables individual nozzles to be turned on and off in series, thereby reducing overlapping when approaching treated areas at headlands and in-field obstacles. 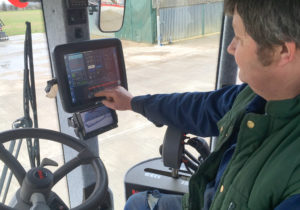 A Topcon X30 console controls the sprayer’s autosteer and nozzle control functions. An identical unit is used to control the cross-slot drill. 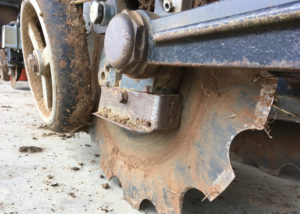 The 6m drill has 27 cross-slot openers spaced at 22cm intervals. It is controlled by a Topcon X30 console, supplied and fitted by LH Agro, which controls all four elements, seed, fertiliser, slug pellet and companion seed (with individual VRC if required) in one pass. 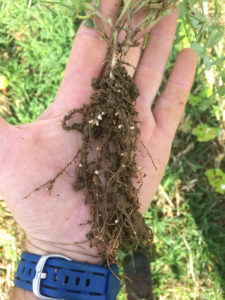