For Rob and Mark Leeson of Kirby Wold House near Malton in North Yorkshire, being able to apply arable inputs including seed, liquid fertiliser and granular fertiliser at precisely controlled variable rates enables them to produce more consistent and more profitable crops.

Rob and Mark Leeson farm 1,500 acres of arable land at Kirby Grindalythe in the North Yorkshire Wolds where their chalk and gravel-rich soils support a rotation of feed wheats, barley and oilseed rape, with potatoes included on a six-yearly basis. With just one full-time employee, the Leeson brothers, who also run a beef suckler herd on 200 acres of grassland and a 35,000 bird broiler unit, are limited by the constraints of available man hours. Their efforts in recent years have therefore been focused on making their farming practices more efficient.

For the farm’s arable venture, this focus on efficiencies has resulted in the Leesons investing in various pieces of precision farming equipment which have not only improved the consistency of the crops they grow, but have also made the daily working regime easier and less onerous to manage.

The Leesons’ first foray into precision farming goes as far back as 2008 when they installed a GPS-guided autosteer system on the farm’s combine harvester.  “We wanted to be able to use the autosteer kit on the drill tractor as well, but struggled to get the system to work on both machines due to various compatibility issues,” Rob Leeson explains.

With the arrival of a new, autosteer-ready tractor a couple of years later, the Leesons decided to take their investment in precision farming a step further.

“We had already seen how much benefit a basic autosteer system was to our system, so decided to take the next step by investing in our own RTK base station along with a Topcon autosteer assembly.”

The farm’s RTK mast and base station were supplied by LH Agro who also installed bespoke wiring looms to enable both the sprayer and drilling tractor to be guided by the Topcon autosteer system.

In keeping with their ethos of ensuring everything on the farm operates as efficiently as possible, the RTK station is powered by one of the farm’s three wind turbines.

“It’s a simple idea, and one which makes absolute sense,” comments Nick Abbey, Sales and Technical Specialist for LH Agro.  “The turbine was already located within a few hundred yard of where the mast needed to be, so we designed a wiring system which allowed us to draw a power source straight from the turbine.”

The RTK system was installed by LH Agro in April 2014 following a detailed site survey to determine the ideal position for the mast to be located.  “We brought our own telescopic mast onto the farm to find the optimal location and built the mast and base station using the very best components available to ensure the signal didn’t suffer any of the interference or inaccuracies that lesser systems are susceptible to,” Nick explains.  “The whole farm is now covered by a signal which is accurate down to 6mm, and it is also being used by three neighbouring farms who lease the signal from the Leesons.  It’s a simple, labour-neutral way for the farm to access an additional revenue stream.”

“We are now operating the majority of our arable implements via the RTK system,” Rob Leeson adds, “with soil cultivations, liquid and granular fertiliser applications, seed drilling and harvesting all using autosteer. We have also recently moved into the realms of variable rate applications and have installed a Topcon CropSpec canopy sensor to assess the real-time nutrient requirements of our crops,” Rob continues.

In its first season, the CropSpec sensor – which can be mounted on the self-propelled sprayer for liquid fertiliser and PGR applications, or on the farm’s main tractor for granular fertiliser applications – delivered noticeable benefits as Rob explains.  “Every field on the farm is hilly and rolling to a greater or lesser extent,” he describes.  “The application maps produced by the CropSpec sensor show that significantly more fertiliser is applied to the sides of valleys, whereas the valley bottoms and any significant depressions where leached nitrogen naturally accumulates will receive far less N from each pass of the sprayer or fertiliser spreader.”

Rob esitmates that the CropSpec sensor alters N applications by an average of 25% across the farm’s total acreage, with the most extreme variances differing by as much as 50%.

“As an example, if our target application rate is 100 litres per hectare, the actual upper and lower limits could be as high as 150 l/ha and as low as 50 l/ha depending on the condition of the crop,” Rob adds.  “We’re not necessarily using any less fertiliser, but what we are using is being applied more accurately and to better effect. Our crops are much more even as a result and are therefore easier to harvest.

With just ourselves plus one employee working across the entire farm, time has always been a precious commodity.  The new systems we’ve invested in have not only helped us to make more efficient use of inputs such as seed, fertiliser and fuel, but have also helped to save valuable time.

Spending 12-16 hours a day operating a sprayer, drill or fertiliser spreader is tiring and stressful enough at the best of times.  The autosteer equipment removes a lot of that stress and not only makes the various cropping tasks less arduous, but also means we’re producing more consistent and, ultimately, more profitable crops.” 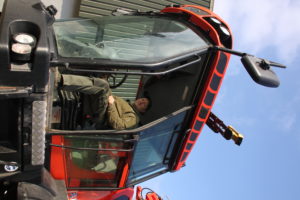 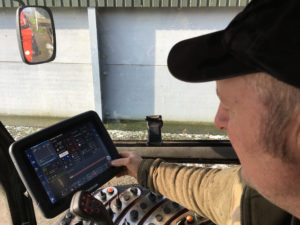 Topcon X30 console gives easy access to the sprayer’s main functions as well as communicating with the CropSpec sensor for variable rate applications of liquid fertiliser. An identical console is fitted to the farm’s tractor to control its autosteer and variable rate drilling and spreading functions. 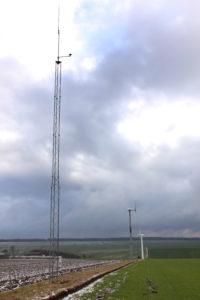 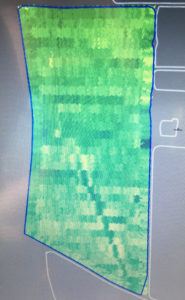