In addition to farming 1,700 acres of their own land and contracted farms at Mount Farm near Epping in Essex, Stuart Galloway and sons, Tim and Alistair, also provide a selection of specialist contracting services ranging from whole farm management, combining, and cultivation to RTK guided variable rate seed, fertiliser and pesticide application.

Galloway Farms also specialises in the application of Avadex granules, a service which the family has provided locally since the 1980’s.

“That can make it difficult to manage customers’ expectations, especially as the unpredictable nature of weather patterns in the UK means it can be tricky to make low ground pressure applications at the optimum timing.”

For the past three decades Stuart Galloway and his brother, John, have used a Toyota Hilux – initially towing a TMA4 Horstine Farmery applicator and latterly a mounted Techneat Avacast spreader – to apply Avadex. As demand for their specialist spreading service steadily grew, a second spreader which was towed behind a quad bike was added.

“To be honest, sitting on the quad for 10 or more hours every day for a whole month during the Avadex season was hard, hard work,” Tim describes. “In perfect conditions – on flat ground with a smoothly cultivated soil surface and no wind to deal with – it was bearable. But on rougher ground or during inclement weather, it could be a complete nightmare to keep on schedule and to apply with enough accuracy.”

The quad bike has therefore been replaced by a Can-Am Traxter which was brought into service part-way through the autumn 2017 season. “With 7,000 acres to treat each year I’d had enough of riding around on the quad bike and wanted something with doors, a roof and a steering wheel at the very least,” Tim adds.

Beyond being a simple operator comfort upgrade, the Can-Am purchase was also part of a bigger plan: “Despite wanting to provide a more accurate spreading service, it had always proven difficult to use the 12m boom spreader with real precision behind the quad,” Tim states. “With more farmers drilling their crops with RTK accuracy we realised that the EGNOS GPS signal we were using wasn’t as accurate as had previously been thought. And because we couldn’t upgrade the quad to an RTK-guided system because of its handlebar setup, we went looking for a steering wheel equipped machine that could be upgraded with an electronic steering kit.”

The Can-Am has subsequently been equipped with a Topcon X30 console, AES-35 electronic steering wheel and an AGI-4 receiver which picks up a guidance signal from the farm’s Topcon RTK base station.

“We use similar Topcon setups to mark field boundaries and create tramlines for fertiliser spreading, cultivations, pressing and ploughing so we know the guidance kit on all of our machines is now 100% compatible,” Tim continues.

“Fitting this type of equipment isn’t cheap, but we managed to reduce the total cost by sourcing a second-hand screen and receiver locally. We’ve also saved a bit by taking the OEM guidance system out of our New Holland combine and using the Topcon kit instead. We never need to use the combine and apply Avadex at the same time, so we’re sharing the cost of the Topcon kit across two machines and should be able to sell the New Holland system.”

Like the quad before it, the Can-Am operates in tandem with the Hilux which is still in operation after 30 years. Both vehicles are now paired with a Techneat spreader: the Can-Am with the trailed machine which works between the tramlines where the Topcon steering wheel takes care of guidance, and the Hilux following the tramlines with a bed-mounted spreader.

“By operating the two machines in tandem we can cover 150 to 200 hectares per day,” Tim adds. “It wouldn’t be possible without the Topcon autosteer kit which also helps to reduce overlaps and missed applications by audibly and visually telling me when to turn the spreader off as I approach headlands.

“In addition to being able to cover a greater area in more comfort I’m also wasting less product which means better returns for us and lower input costs for our customers. And because we’re applying the Avadex granules more precisely, we’re doing our bit to ensure we’re using the herbicide responsibly and not jeopardising its efficacy by under or over-applying.” 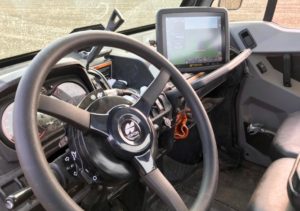 The Can-Am buggy is equipped with a Topcon electronic steering wheel and console which provide accurate guidance and auto-steer where tramlines aren’t present.